ST. PETERSBURG, Russia — Wanting to buy her first car, a Hyundai sedan, Elmira Agaliyeva applied for a bank loan of 800,000 rubles in 2016, the equivalent of about $12,600. Within an hour of completing the application, it was approved.

“Of course it was a good feeling, because everything I had thought of doing could be accomplished,” said the 34-year-old lawyer, who also does odd jobs to make ends meet.

Ms Agaliyeva, who in recent years has borrowed to buy land, go on vacation and furnish her apartment, now uses 30,000 rubles of her 50,000 rubles monthly income to pay off her debt.

More ordinary Russians have come to depend on easy loans to buy property, maintain a certain standard of living, or simply to survive.

As the real disposable income of Russians continues to fall – it fell every year between 2013 and 2018 – personal consumer loans have exploded, reaching around $130 billion last year, up 46% from 2017, according to the Moscow-based United Credit Bureau, which tracks the credit histories of 90 million Russian borrowers. Most of Russians’ debt is due to an increase in unsecured cash lending, the country’s central bank has said.

Interest rates on bank loans range from 12% to 19%, depending on the term of the loan, according to data from Russia’s central bank. But commercial or non-profit lending institutions other than banks often rip off borrowers with interest rates of up to more than 500%, according to local financial experts.

Russian officials fear the borrowing boom could further undermine the country’s financial stability. Western sanctions against Moscow and low oil prices, on which the economy is heavily dependent, have rattled the Russian economy, weakened the ruble and worsened already sluggish growth. Nearly 13% of Russians live in poverty, according to government data.

Russian President Vladimir Putin warned in June that banks were giving loans to people whose repayments amounted to 40% of their salary, fueling a possible bubble.

Maxim Oreshkin, the country’s economy minister, predicted that the bubble would burst and drag the country into recession if lending was not brought under control by Russia’s central bank.

“Our estimate is that 2021 is the year when [the consumer-lending problem] going to explode,” he told local radio station Ekho Moskvy in July.

Russians on average hold nearly 290,000 rubles, or $4,600, in debt, according to United Credit Bureau. That’s a meager sum compared to the United States, where the average personal debt is about $38,000, excluding mortgages, according to Northwestern Mutual, a financial services organization. But the average Russian monthly salary is around $670. About 44% of Russian households are in debt, according to the central bank, up from 34% two years ago. One in eight Russian borrowers devotes more than 50% of their income to repaying their loans.

The “consumer loan boom is having a negative impact, especially on the lives of those earning low incomes,” Mr. Oreskhin said in an interview with The Wall Street Journal. “It’s a big problem.”

Elvira Nabiullina, governor of Russia’s central bank, disagrees that consumer lending is creating a bubble and insists the debt boom is under control. But from October, the central bank will require lending institutions to calculate borrowers’ incomes and indebtedness before granting new loans, something many lenders currently do not do. The Economy Ministry is also considering measures to support people who cannot pay their debt. 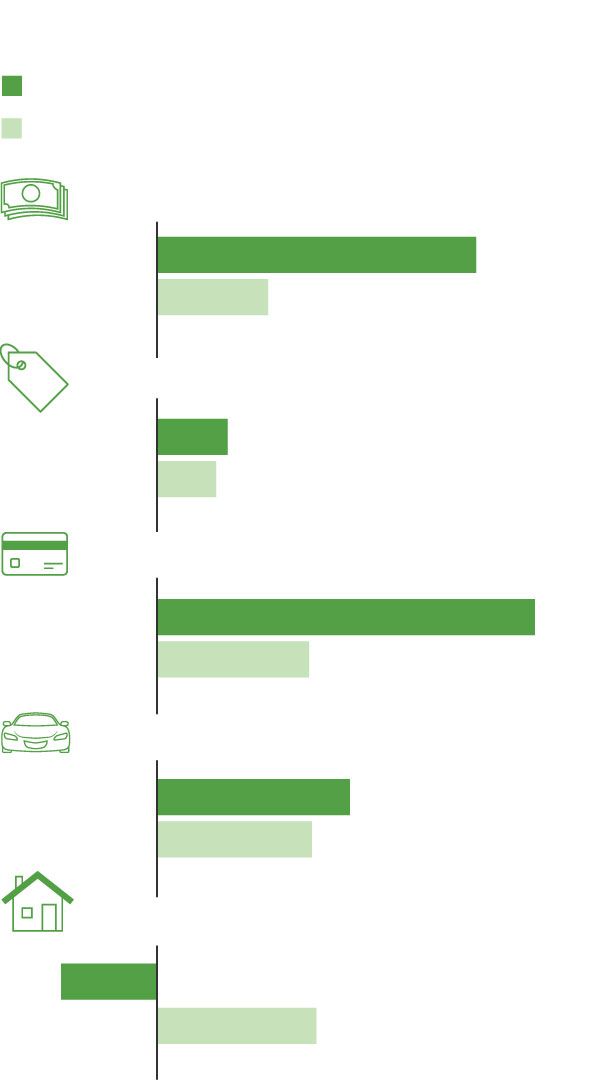 Average debt held by a household

“The problem is that people have gotten used to making easy money,” said Nazar Achilov, director of the St. Petersburg Center for Personal Finance, which provides financial literacy classes. “We have credit offers sent by SMS, online credit, the pressure of advertisements has increased. Anyone can apply and easily obtain a small sum.

The phone call from the bank offering Vyacheslav Kondaurov a loan of 120,000 rubles fell out of the blue in May, one of many such offers he has received in recent months. A day later, a bank official showed up at Mr. Kondaurov’s room rental with the paperwork already completed. He just had to sign.

He used the money, the equivalent of about $2,000, to buy items for his industrial cleaning startup and plane tickets to visit his girlfriend in central Russia, as well as to fund a three-day spiritual retreat. One-fifth of the 50,000 rubles his business earns during the summer months is spent on refunds.

“The loans help me maintain my lifestyle, my standard of living,” Mr Kondaurov said, although the debt is “like a weight on my shoulders”.

The propensity to borrow means that Russians do not save or simply cannot save. According to Levada Center, an independent Russian polling agency, 65% of Russian families have no savings.

About 21% of American workers are unable to save at all, according to a study conducted earlier this year by Bankrate, a New York-based consumer financial services company. Nearly 27% of Americans would have to borrow or sell something to cover an unexpected $400 expense, according to an annual study by the US Federal Reserve.

Andrei Ivanov, who took out a cash loan of 350,000 rubles to buy a new car and mobile phone, says he’s never been good at saving. He also borrowed to finance vacations in Europe and the Himalayas.

“Instead of saving, I just give my money to a bank,” said Mr Ivanov, 60, who earns about 150,000 rubles a month as the head of the production department of a construction and construction company. design. “I understand that I will pay more, but I will pay more in the future, not now…I want to live in the moment.”

He recently received an unsolicited text message for a pre-approved loan of up to 650,000 rubles from a bank.

Many banks are hitting back at claims that they are too quick to lend money. Some said they already do careful assessments before approving loans and extending credit.

Moscow-based Tinkoff Bank has strict rules to attract “only the most financially disciplined and high-quality customers,” spokeswoman Darya Ermolina said in an email. “Basically, low limits and low approval ratings are our religion.”

Some bank representatives said that consumers sometimes lack financial knowledge and need additional advice, which they provide. For example, Ms. Ermolina noted that during an early marketing campaign by Tinkoff, some potential customers mistook real dummy credit cards sent in the mail and tried to use them.

Defaulting on payments after accepting unmanageable loans is pushing many Russians to file for bankruptcy under a new personal bankruptcy law that came into force in 2015. The law covers those with a total debt of more than 500,000 rubles and more than three months of missed payments. In the first half of this year, 29,000 people filed for bankruptcy, up 1.5 times from the same period a year ago, according to the United Credit Bureau.

Rustam Khairetdinov is about 2.8 million rubles in debt, due to money he owes on his mortgage and payment for a new Honda CR-V.

His salary, which fluctuates between 100,000 rubles and 150,000 rubles depending on the contributions of the video production company he owns, allows him to repay 47,000 rubles a month. Nevertheless, he is eager to put his finances in order.

“I’m a very responsible person and this method of getting money doesn’t suit me,” he said. “I want to learn new ways to manage my finances.”

How Federal Student Loans Will Change This Year